Get the Latest COVID-19 and Vaccine Information 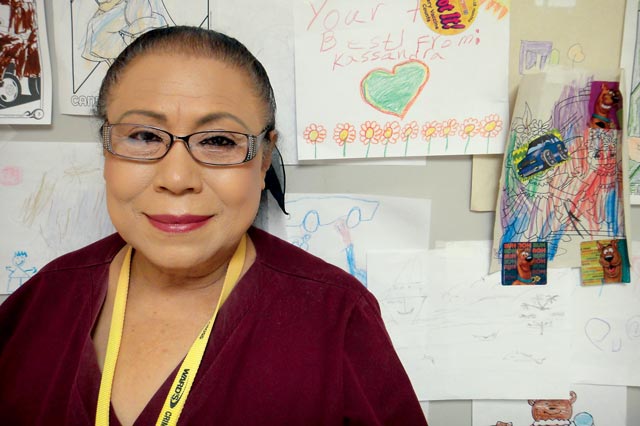 Lori Guerrero doesn’t have an easy job. As a sexual assault nurse at South Texas Health System McAllen, she treats adult and pediatric patients who have been victims of unthinkable abuse. Even after four decades on the job, Guerrero says, "you listen to what they’re telling you and think, 'This can’t be happening.'"

Guerrero used to treat three to five victims in a single year. Now she often sees seven patients in a 24-hour period.

"Sexual assaults have been happening forever, but there’s more awareness of these crimes now," she said, explaining the rising reports. In a way, the difficult nature of the job is what drew Guerrero to it. A native of McAllen, Guerrero, 69, became a licensed vocational nurse in 1971. She then went to work in the Emergency Department (ED) of McAllen General Hospital, which is now South Texas Health System McAllen and is part of South Texas Health System.

Children and adults of both sexes who have experienced the trauma of sexual assault have resources available to them through the Emergency Department (ED) and through our Sexual Assault Nurse Examiner (SANE).

Learn more about the SANE program

Occasionally, when sexual assault victims would come into the ED, Guerrero noticed that some nurses shied away from treating them for fear of the unknown and because of the additional time it took to care for these patients. The cases can be emotionally draining and often require extra paperwork or court appearances, she said.

"I always ended up getting those patients," Guerrero recalled. "I don’t look at the paperwork or at the time. I look at w­hat the patient needs."

A doctor recognized Guerrero's compassion for these victims and encouraged her to become certified as a sexual assault nurse examiner (SANE). In 1988, Guerrero completed SANE training in Houston — a semester-long program that required her to work two days at the hospital and attend classes for four days in Houston, more than six hours away.

In 1995, Guerrero returned to Houston to get certified in treating pediatric sexual assault victims. Treating children is even more challenging, but she connects with them by speaking on an age-appropriate level and giving them coloring books.

The most rewarding part of her job is “when you finish examining a child and they give you a hug. I didn’t know this child two or three hours ago, but now it’s like I’ve known her forever,” she said.

Guerrero wants victims to know that compassionate care is available 24 hours a day in South Texas Health System McAllen’s ED. Patients can be treated anonymously. Evidence is stored for at least six months, so victims have time to decide on pressing charges. And Guerrero has helped many patients by presenting evidence in court. Over the course of her career, she’s seen thousands pediatric and adult patients.

The job sometimes takes an emotional toll, but Guerrero relies on her faith to get her through the hardest parts. “It’s a challenge. But if I were to do it again, this is where I would be,” she said.

If you are having a medical emergency, call 9-1-1. Refresh your screen to get the latest wait time. For the most accurate wait time, call the hospital.